An ebullient market environment has rapidly turned chaotic. The confluence of new COVID lockdowns globally and increased uncertainty around the outcome of the US elections has created a palpable fear among investors. The positive market narrative of a strong economic recovery has given way to a palpable fear around disappointing corporate earnings, particularly for big-tech market stalwarts that have dominated S&P 500 performance for the whole year. Multiples in general suggest that stocks were priced to perfection coming into this week, and therefore were ripe and even vulnerable to a significant sell-off. The Dow is poised to close the week down 7.45 percent, the S&P 500 down 6.32 percent, and the NASDAQ 100 down 5.4 percent. It is entirely possible, and even probable, that the market environment could remain like this for a while if there is no clear victor on election night. We see this as an increasing risk given the high percentage of mail-in ballots.

Fear is clearly evidenced in a few important areas. The VIX Index, a benchmark of the expected volatility of the S&P 500, spiked to above 40 – a 40 percent move over the last five days. Although nowhere near the extremes in March, it is certainly indicative of a decline in sentiment. So, too, is a spike in the trade-weighted dollar index as investors flee from risk assets – or at least the perception of such. Cash, in other words, is no longer trash, and in markets like these is often thought of as a safe haven.

Precious metals, while outperforming the overall market, were lower across the board. Gold was down 1.3 percent for the week. The HUI NYSE Arca Gold BUGS Index was off 3.4 percent despite very positive earnings reports and several meaningful dividend increases within the sector. Senior companies continue to reiterate a commitment to capital discipline over growth, and we applaud the focus on returns. The GDXJ Junior Gold Miners underperformed seniors, and were off 6.1 percent. Silver was off 4.2 percent, and platinum was off 6.4 percent.

The sell-off hit cyclicals particularly hard, and natural resources were no exception. The S&P Global Natural Resources Index was off 5.5 percent. Oil saw renewed liquidation after having held in a tight range around the $40 level, and was off 11.2 percent. Renewed concerns around what a second round of global lockdowns might mean weighed heavily on this market. We remain constructive that the market will recover into the back half of 2021 or early 2022 as dramatic shale declines coupled with a high cost of capital, bringing about a dearth of investment in exploration. Production will slowly bring the global markets into balance. Oil and gas stocks fared poorly as well, although actually having outperformed the commodity. The S&P Energy Index was off 6.2 percent, the Oil Service Index was off 7.1 percent, and the S&P Oil and Gas Exploration and Production Index was off 10.3 percent. Surprisingly, Doctor Copper and the base metals held up reasonably well, off only 2 percent. Nickel was off 1.2 percent, and Zinc was off 1.1 percent. Lumber, after having had an incredible run on the homebuilding boom, was off 3.8 percent for the week. Natural gas was the only positive stand out, up 12.8 percent for the week.

Real Estate did not fare particularly well. The Dow Jones REIT Total Return Index was off 5.6 percent. Many property types face ongoing challenges, with increased vacancies and fears around additional business closures as we face the possibility of a second wave of COVID and a second round of lockdowns. Given the fact that not all property types are affected equally, this could present a future opportunity for investors. As a general rule, public REITs have been preparing for an ebbing of the real estate cycle for years. In aggregate, balance sheets are well positioned for a downturn.

Even the normally defensive infrastructure group took a meaningful hit. The US Infrastructure Index was off 5.8 percent. Utilities, normally a relative stalwart when the markets shed risk, were off significantly, with the Dow Jones Utilities Index off 4.4 percent. The Alerian MLP ETF was off 8.1 percent for the week.

The frothy and optimistic market environment – coupled with positioning that was seemingly one-way per the below chart of long bets on S&P 500 futures, and the possibility of a surprise that was not at all priced in – was ripe for a sell-off. In a post-COVID world, volatility is to be expected. The markets must digest big gains year-to-date. Sentiment has once again turned very ugly as we push into oversold territory. It is a good time to have dry powder while hunkering down and understanding company fundamentals. 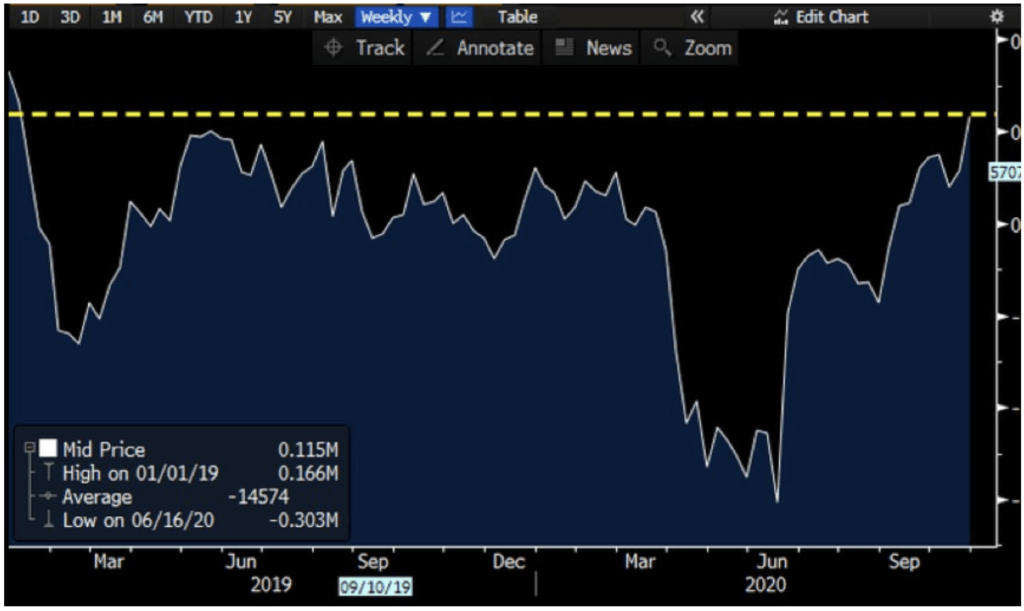 Morgan Lewis Posted on October 30, 2020
Stay Ahead of the Market
Receive posts right to your in box.
SUBSCRIBE NOW
Categories
RECENT POSTS

Unfinished Business from 2022 Happy New Year to our MWM clients and all HAI readers! With holiday festivities ongoing, HAI will merely offer some thoughts to [...]

Merry Christmas! Merry Christmas to our MWM clients and all HAI readers. With holiday festivities fully ramped-up, HAI will just offer prices for this week. [...]