Will Energy Rise from the Ashes?

Amidst the so-called summer market doldrums this week, a quiet but substantial reconstruction of the Dow Jones Industrial Average was announced. The Dow is a price-weighted index of 30 stocks that are representative of United States industries. It does not include utilities and transportation companies, which have their own respective indexes. When many people think of “the market,” this index is what comes to mind. When the market crashes, collectively, we think of it in Dow points.

A reconstitution is a move that we have not seen since 2013. Normally, this would have caught our attention only peripherally. However, there was one company in particular that made us sit up and think about its broader meaning within the context of the capital markets, as well as societally.

Exxon Mobil is – now was – the longest-tenured Dow Jones Industrial Average component. Founded as Standard Oil, it entered the index in 1928 and was a branch of the Rockefeller Empire. When Exxon merged with Mobil oil back in the late ’90s, it became and remained the world’s largest publicly traded company. Although one other energy company remains in the Dow, we have to wonder what this means for the significance of energy investing going forward.

Historically speaking, energy stocks were a significant component of the S&P500. Going back 15 years, energy as a percent of the S&P500 has gone from 20 percent to hovering around the 3 percent area (Chart 1). Even energy companies are talking about pivoting away from hydrocarbon production and investing in renewables. It begs the question – are oil and gas becoming irrelevant within the context of the global economy? 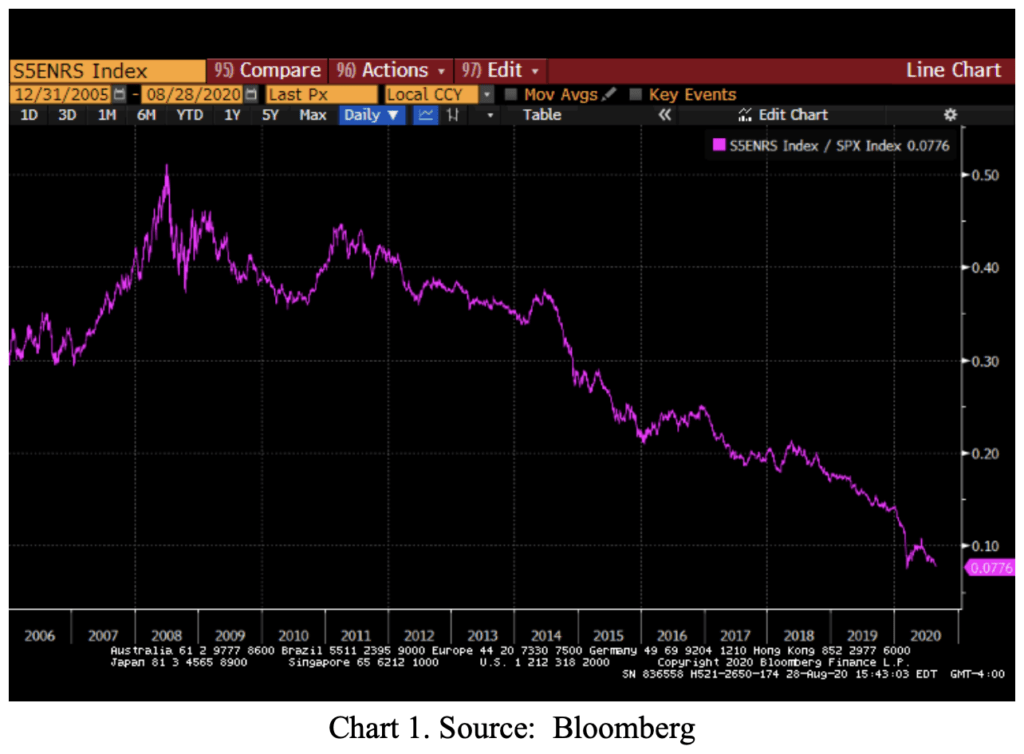 The pandemic threw an already challenged industry into chaos. Energy companies that had challenged balance sheets coming into the crisis now face an existential threat. Seemingly, there is an E&P company a day that files for bankruptcy. You can see in Chart 2 that although this trend was occurring prior to COVID, it has accelerated post-pandemic. Consulting group Rystad Energy believes that the worst is yet to come in that regard (Chart 3).

Ultimately this has created a capital expenditure “bust” that has led to a more than two million barrel a day decline in production. The industry is being almost entirely starved of capital. Exploration activity has ground to a near halt. 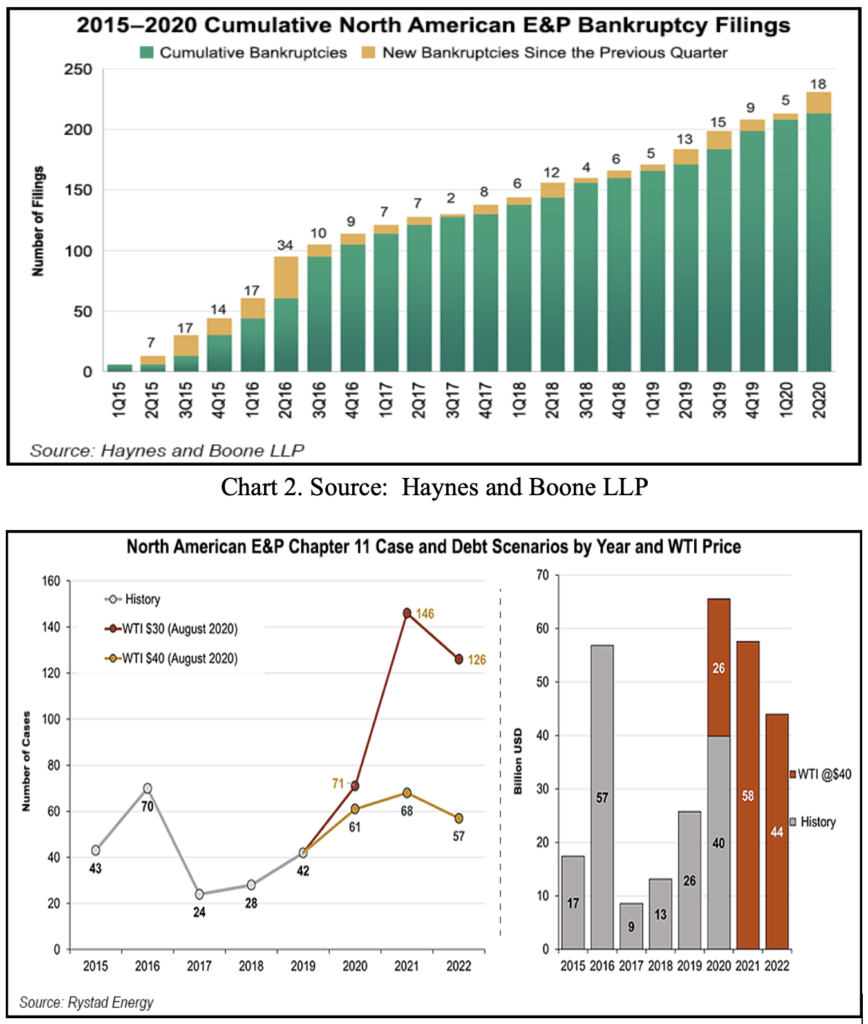 Ultimately this is good news for pricing and for the future health and returns of the industry. The cure for low prices ultimately is low prices, and such is the nature of commodity cyclicality. The collapse in energy prices has forced companies to favor returns on invested capital over reserves and production growth. Capital discipline on the part of producers, as well as OPEC’s comment that it will support the market without allowing shale to grow market share, has stifled investment in new discoveries.

Rystad indicates that globally, capital expenditures in the industry are likely to decline by $100 billion dollars this year to around $450 billion. Further, they believe that number could be closer to $300 billion by the end of 2021. In the shale industry in the United States, they believe capital expenditures will decline 30 percent year-over-year in 2020. Annually, Evercore ISI publishes an E&P capex survey that suggests that spending will hit a 15-year low in 2020.

There are potential structural winds of change that will impact the demand for hydrocarbons over the long-term because of a shift toward more sustainable energy sources over the medium term. However, as the real economy begins to heal itself from the effects of the pandemic, a recovery will also occur in the oil market. As an industry, energy, while perhaps pivoting at the margin, is hardly dying.

It is hard for us not to look at this through the lens of contrarian investing thematically, and it is this kind of capitulation that makes us want to maintain sharp pencils. We can only hope that management teams of producing companies follow this time-tested advice, which is wholly applicable to any commodity producing company: 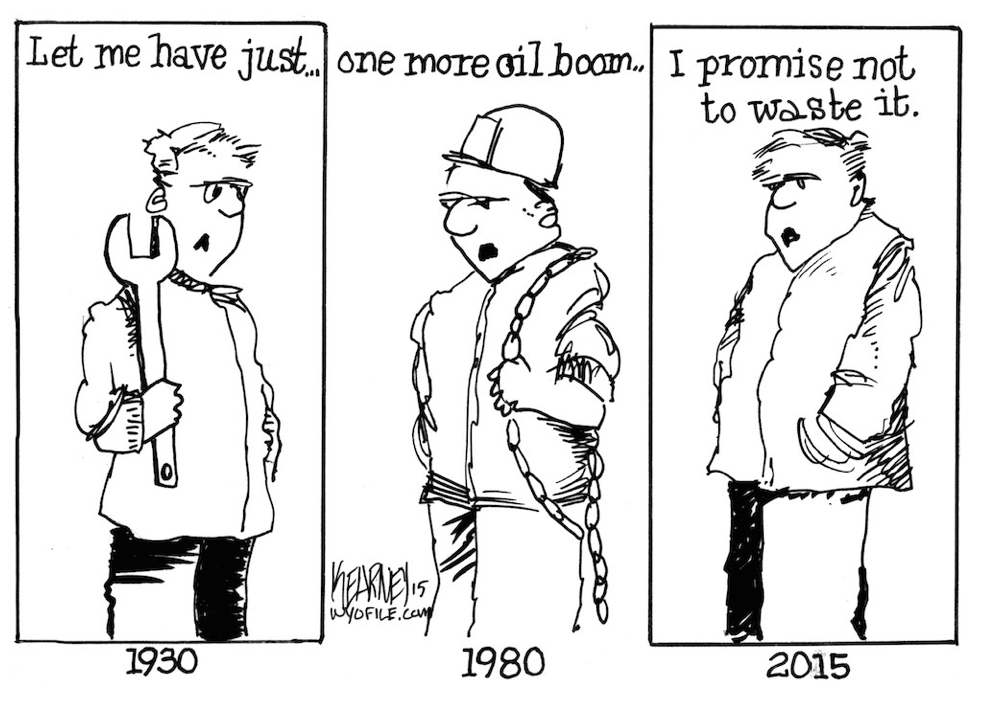 Disclosure: This information should not be construed as investment advice or a recommendation to buy or sell any security or investment product. MWM does not own any shares of (Name of Company).

Morgan Lewis Posted on August 28, 2020
Stay Ahead of the Market
Receive posts right to your in box.
SUBSCRIBE NOW
Categories
RECENT POSTS

Seeing Through the Fog of War HAI has long viewed the outbreak of consumer price inflation to 40-year highs as a consequential game changer for the economy and [...]

The Next FOMC Meeting Could Be Historic This week, HAI is being composed in the skies high above America—regrettably, in a plane with no Wi-Fi. A popular [...]