We remember the late 1990s so well.  It was the decade of Kurt Cobain and The Blue Dress. “The Matrix” was number one at the Box Office.  Technology was in the early stages of changing the way we live, consume, and work, and the internet became the most important technological advancement in the modern world.  It was also the era of the “DotCom Bubble,” a time where internet stocks went up exponentially for companies that were being valued on “clicks” rather than on cash flows.  There were record amounts of capital flowing into the market for companies with little to no competitive moat.  The environment became increasingly irrational and speculative for companies with no profits for the foreseeable future.  Alan Greenspan was warning us all about “irrational exuberance” while maintaining loose monetary policy.  Cab drivers turned into day traders and schooled professional investors on how to make money in the stock market.  For a while, anyway.  At least until the Nasdaq topped on March 10, 2000.  A great many of those companies are no longer in existence today.  Lesson being, fundamentals matter, eventually.

The title of our article is a French expression meaning “the more things change, the more they stay the same.” Bringing our time machine back to the Summer of 2020, a global pandemic brought the world economy to a screeching halt.  The market came crashing down and the Fed stepped in to backstop the financial system, which increasingly appeared to have existential risk.  No one could have predicted what would happen next.

Day-trading and rank speculation is back in an incredibly big way, and short covering has taken on a life of its own. The era of the day-trader with little knowledge of how companies are valued is once again upon us.  Many people are cooped up in their homes with little else to do. They see that the “opportunity” to make easy money day trading and speculating in companies that have wild volatility is quite casino-like.  This is all unquestionably a part of this decade’s zeitgeist of boredom coupled with easy money.  Dave Portnoy, notorious sports gambler and founder of Barstool Sports, was quoted as saying the following:

“It took me a while to figure out that the stock market isn’t connected to the economy.  I tell people that there are only two rules to investing:  Stocks only go up, and if you have any problems see rule No. 1.”

Quite clearly, there is no analysis based on fundamentals. Twitter traders celebrate making money in airline stocks while trolling Warren Buffett as a “washed up” know-nothing relic for having sold them due to fundamentals he sees deteriorating for a long time to come.

This dynamic is very clearly evidenced in the trading patterns of bankrupt or near bankrupt companies.  Here is the chart of the equity of a rental car company post-bankruptcy.  We will remind the reader that, the overwhelming majority of the time, the reason a company files for bankruptcy is because there is no equity value left in the company. At a minimum, the equity holders are at the very bottom of the capital structure, and do not recover value unless all of the creditors are paid.  We are doubtful that there will be demand for this potential issuance in the event that it occurs, but we are equally quick to point out that very little about the current environment is rational. 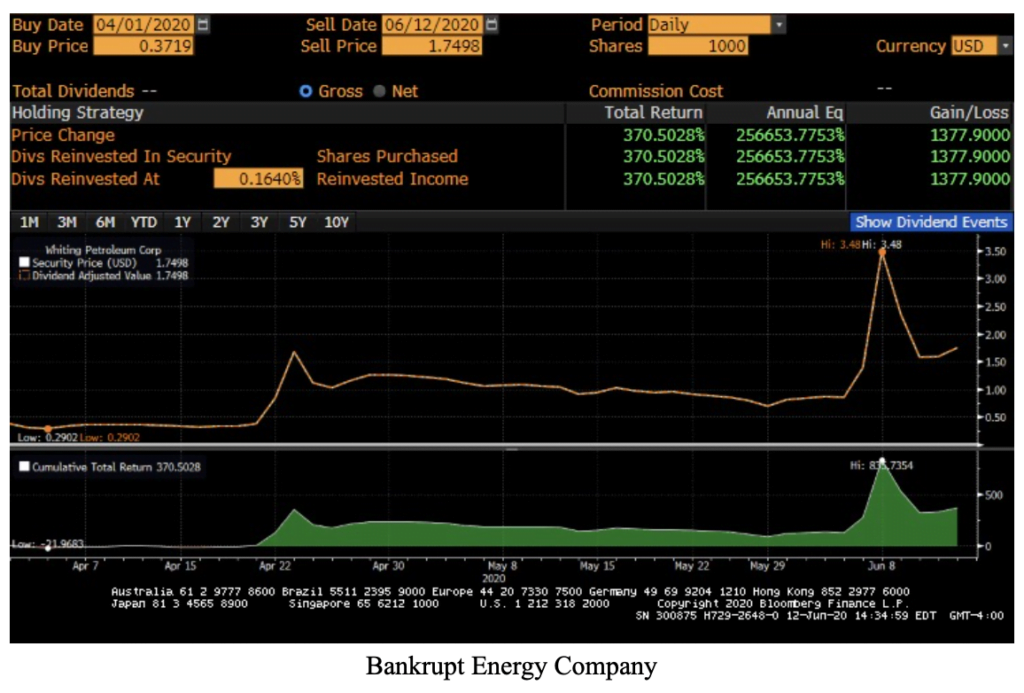 The stock is up 427 percent since the bankruptcy filing – clearly irrational and wild-eyed speculation.  This particular case is so incredible that the company may actually have the ability to bail itself out with an equity issuance as the company is now seeking emergency relief from the courts to do so.  Ironically, this will recover more for the bondholders, and they will end up taking the company anyway.  Equity holders providing DIP financing for the creditors is one of the more spectacular potential transfers of wealth that we have ever seen.

We have to wonder whether, with casinos closed and sports betting non-existent, gambling has made its way into the markets.  The growth since COVID of the trading platform Robinhood, a platform for retail investors, suggests that this is indeed the case. It has added three million customers in the first quarter, and now serves 10 million retail customers – an incredible 43 percent increase in the quarter.  As you log in to the trading platform, the catch phrase is “It’s time to do money.”

Here is an energy company that filed for bankruptcy protection under Chapter 11 on April 1. It’s another clear example of irrational trading patterns in equity with little to no value. 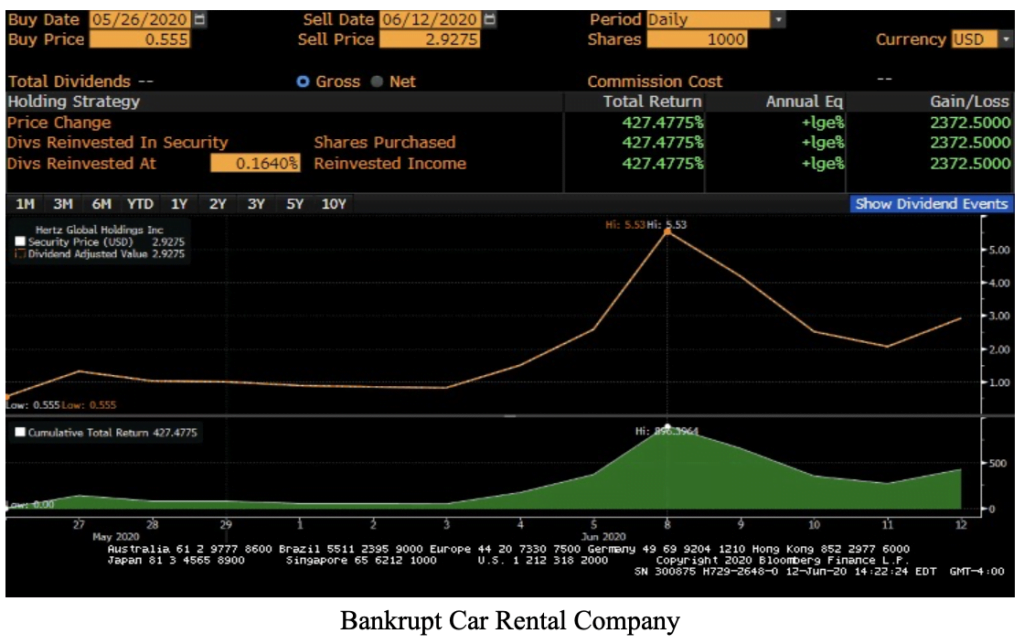 There are many examples of bankrupt or near bankrupt companies that have seen similar gains.  Once again, just as we saw in the late 1990s, the principles of sound investing have been foregone in the name of the euphoria of a quick buck.  The madness of crowds is once again upon us.  In the face of an environment where risk has never been higher, speculation is rampant. But we remember all too well what can happen when fundamentals are disregarded.  History may not always repeat itself, but it certainly rhymes.

Morgan Lewis Posted on June 12, 2020
Stay Ahead of the Market
Receive posts right to your in box.
SUBSCRIBE NOW
Categories
RECENT POSTS

Seeing Through the Fog of War HAI has long viewed the outbreak of consumer price inflation to 40-year highs as a consequential game changer for the economy and [...]

The Next FOMC Meeting Could Be Historic This week, HAI is being composed in the skies high above America—regrettably, in a plane with no Wi-Fi. A popular [...]